<![CDATA[Aquafaba hit the vegan food scene over a year ago and has shown up in many recipes since then. Aquafaba could be a big resource for our patients on Dr. Green’s Autoimmune Diet, as it works well as a binder (like eggs).<h3>What is Aquafaba? 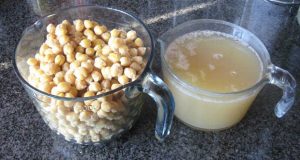 Aquafaba is the thick liquid that results from soaking or cooking legumes, such as chickpeas, in water for an extended period of time. It’s the translucent viscous goop you probably rinse down the drain when you open a can of chickpeas. And, in vegan cooking circles, it’s become the silver bullet to making airy meringues and expert whiskey sours without any eggs.

How To Use It

Sub in for eggs and egg whites wherever needed—pancakes, waffles, mayonnaise, meringues, you name it. Wohlt says the rule of thumb is: 1 Tbsp. for one yolk, 2 Tbsp. for one white, and 3 Tbsp. for one whole egg. That said, the consistency of your aquafaba makes a difference. It is suggested to reduce watery aquafaba about 25 percent on the stove to thicken it up. If it’s already thick (as it sometimes is from canned chickpeas), you don’t have to reduce. With some trial and error, you’ll get a feel for it.

Here are some great recipes to try, using aquafaba.